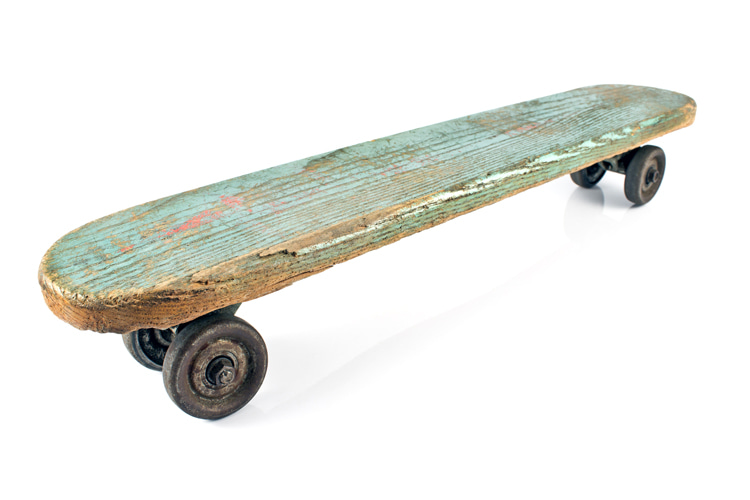 The skateboard - and skateboarding - are an American invention and innovation born in the garage and inspired by surfboards and surfing.

The early form of the skateboard dates back to the early 1900s.

It looked like a scooter and featured roller skate wheels attached to a two-by-four and a milk crate or wooden box nailed to it with handles sticking out for control.

The skateboard design evolved over the next five decades until riders cruised on just the two-by-four with steel wheels ripped from strap-on roller skates.

"The first skateboards were essentially scooters shorn of the crate and handlebar components (...) that many have appeared in the 1930s and 1940s through the experimentations of La Jolla surfers like George 'Buster' Wilson and Peter Parkin," suggests Iain Borden, author of "Skateboarding and the City."

"The two-by-four inch wood strip could be replaced by a short wooden deck measuring around 20 inches long and six inches wide."

"Smaller, more maneuverable, and easier to store than scooters, the skateboard still stopped whenever meeting a rough surface or small pebbles." 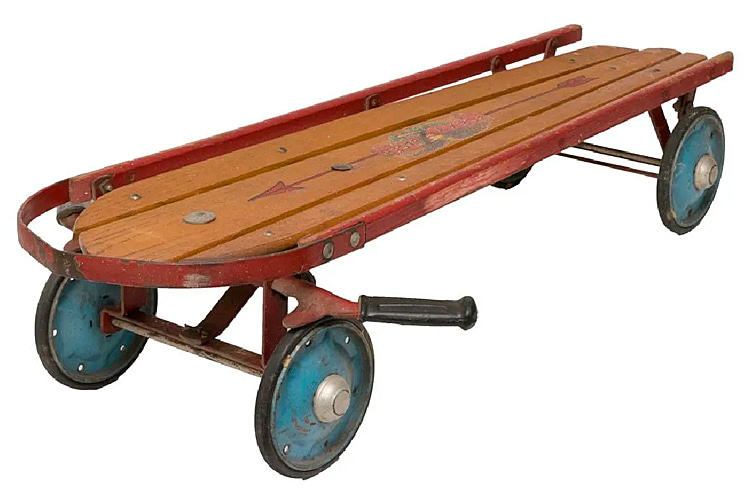 The Skateboard as a Homemade Toy

According to historians, the first commercial skateboards hit the market around 1957-1959.

One of the first technological advances was clay wheels, which made the ride smoother. They were adopted from commercial roller skate rinks.

However, equipment found on the streets still had no striking graphics, and most of the pioneer skaters made their own gear using wood planks and old iron skate wheels.

Initially, the term used for the outdoor activity was "sidewalk surfing."

The concept refers to the sport Southern California surfers had embraced when the ocean was flat or the waves were too small to be ridden.

They found a way to hit the concrete of the boardwalks and asphalt of their coastal towns, mimicking the maneuvers, tricks, and body movements they performed on the waves.

"We just rode imaginary waves and blazed all over the city," described Wentzle Ruml.

These were the days of the hula hoop, Frisbee, yo-yo, and Schwinn Built American Flyer with chrome handlebars, fender, and racks on the back.

There were no smooth wheels, bearings, half-pipes, helmets, or protection pads. It was all about riding primitive, homemade skateboards.

But a revolution was about to change the streets of SoCal.

"The DIY deck culture that started it all - hacking together boards from found and borrowed parts in the garage - couldn't keep up with the demand," highlights Matt Berger, author of "The Handmade Skateboard."

"And why should it? An entire industry of specialized makers was champing at the bit to innovate." 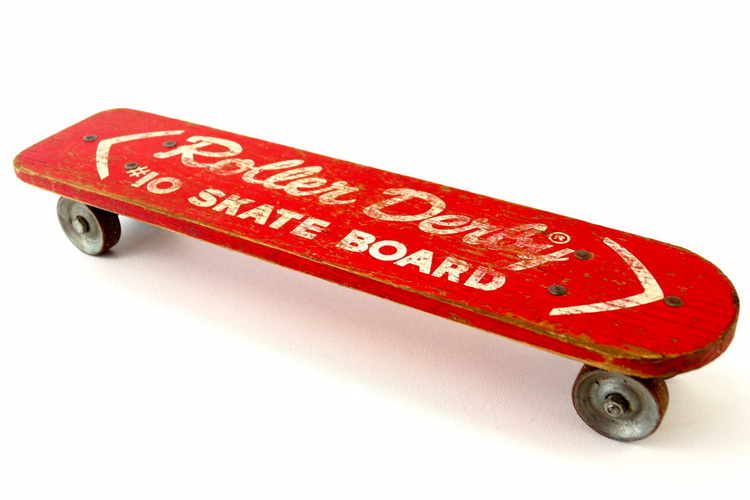 From the Flexible Flyer to the Modern Skateboard

So, who exactly invented the skateboard?

The history of skateboarding tells us that the world's first modern skateboard was designed and manufactured in the late 1940s, early 1950s.

Although it is not possible to identify the sole creator and inventor of the first-ever skateboard, we do know that several youngsters were using the Flexible Flyer sled to have fun at around the same time.

"These kids were charging down small drainage pipes on Mount Soledad, lying on their stomachs while holding flashlights, corkscrewing upside down and flying out on the beach - a hybrid of the Flexi Flyer and the broken scooter," notes Jocko Weyland, author of "The Answer is Never: A Skateboarder's History of the World."

"What had been a broken toy was combined with the thrillseeking aspects of the Flexi Flyer to create something independent of its antecedents."

"The kids were riding the scooter planks, purposely not putting the handle back on. The skateboard was born. No matter how primitive the equipment was, it wasn't a toy any longer."

Teenagers were surfing barefoot over unforgiving metal wheels that caused the skateboard to stop short at the slightest crack and as they wore down.

Initially, toy companies cashed in on the hype with gimmicky products like The Scoot Kit and the Roller Derby skateboard with metal wheels.

"The concept of a rolling plank of wood was revolutionary enough that there was little innovation in skateboard design and construction during its adolescent years," states Matt Berger.

"The trucks and wheels were borrowed from roller skates - no one had yet designed a set specifically for a skateboard. And the deck shape remained mostly square, small, and flat."

But soon, skater and surfer-led companies began designing specialized products and turning them into lucrative businesses. 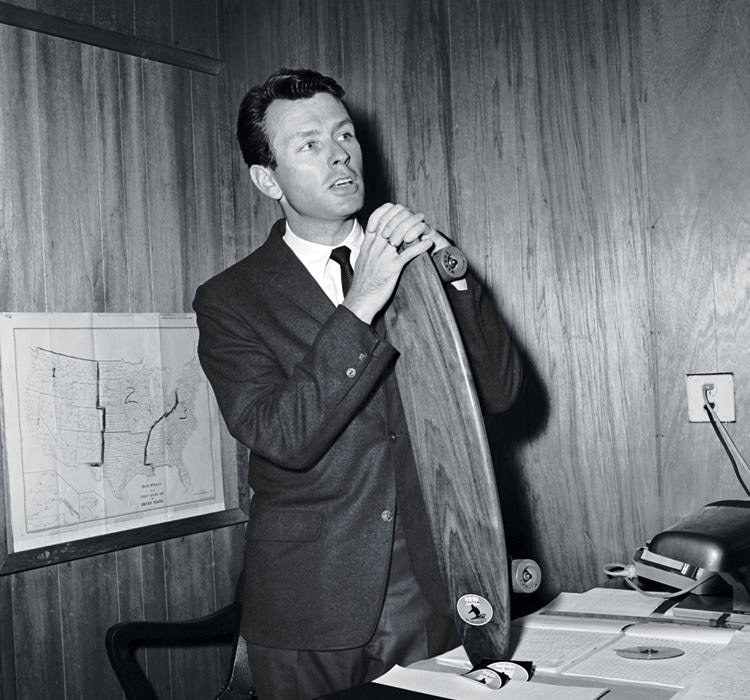 In 1961, inspired by the scooters with a handle attached that Leo Carrillo gave children at orphanages and state homes in California during Christmas time in 1939, Stevenson thought skateboarding could be a part of surf culture.

Therefore, he used his "Surf Guide" magazine to lay the foundation for the roots of surfing to mesh with the new outdoor activity.

In 1963, Larry Stevenson founded Makaha Skateboards with a production center in Santa Monica.

One of his early models was the Makaha Standard, a 29-inch-long skateboard shaped like surfboards and retailing at $12.95.

"Larry Stevenson experimented with a variety of materials to make skateboarding better, including plywood and foam, and even nylon wheels," explains Michael Brooke, author of "The Concrete Wave."

"He was an innovator. Makaha was the first company to sponsor a skateboard team. Riders like Squeak Blank, Danny Bearer, Woody Woodward, Terry Spencer, Steve Tanner, and John Freis would travel to various places and give exhibitions.

Stevenson also invented and patented the kicktail, probably the most important functional design in skateboard history. 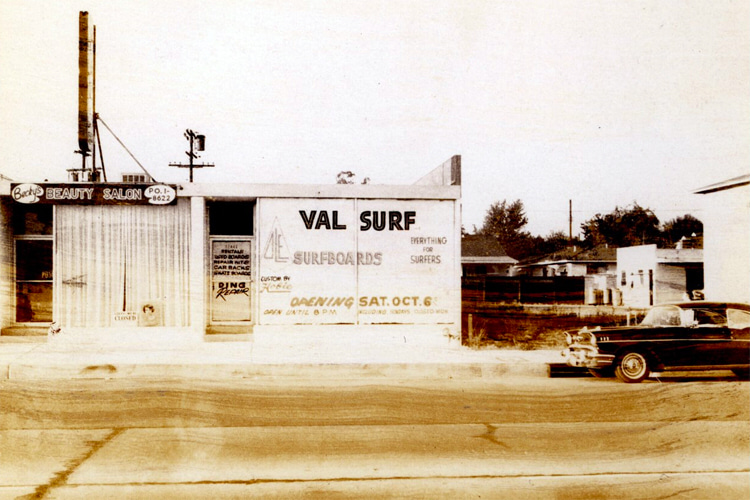 In the early 1960s, surfers were stoked by the opportunities opened by skateboards.

Although primarily a surf shop, the North Hollywood store was the first of its kind to sell skateboards as more than just toys.

"They went to the Chicago Roller Skate Co. with the idea of buying just the truck assemblies. At first, the company was reluctant, but eventually, they decided to sell the trucks to Val Surf," underlines Brooke.

"High school students would shape the board and mount the trucks. In the beginning, Val Surf sold only small numbers of complete boards - fewer than ten a week."

"However, everything they made, they sold. It didn't take long for their business to take off. Besides walk-in customers, Val Surf offered skateboard by mail."

The 1960s were the golden age of skateboards - sidewalk surfing moved from a niche to a national sensation.

The new sport was making the cover of Life magazine, and John Lennon was getting photographed riding a skateboard.

At the end of 1965, the United States had 15 million practitioners, and the industry generated $100 million in annual sales.

After the downturn in popularity in the 1970s, the skateboarding fever would expand across the world, transforming the skateboard into a timeless symbol of youth and urban culture.